Gallery Rifle is shot on small compact ranges at distances ranging from 10m to 50m. The firearms used for this type of shooting are typically .22 rimfire semi automatic rifles such as the Ruger 10/22, or  centrefire .38 underlever rifles such as the Winchester and Marlin underlever models.

A variety of courses of fire are used to test the shooter at different ranges with the targets turning and facing at different intervals.

Many of the courses of fire are derived from the original Police Pistol turning target disciplines that used to be shot with revolvers and semi-automatic pistols prior to 1996.

Target Rifle involves shooting prone at between 200 and 1000 yards, and is a discipline that tests a shooters accuracy and ability to judge wind conditions, which is increasingly difficult as the distance to the target increases.

Practical Rifle is a discipline designed to test a shooters familiarity with equipment, and accuracy when subjected to light practical exercises, performed against the clock or utilising a comstock scoring system. The targets for Practical Rifle can be varied in size, might sometimes be moving, may be presented in a convoluted order or sequence, and therefore designed to further test the shooter.

The McQueens is a snap shooting competition shot at either 200 or 300 yards, which utilises a castellated target structure with apertures cut into it, and is shot from the prone position. The target structure occupies two shooting lanes and the course of fire consists of 10 shots fired at a target that appears for three seconds randomly at one of the apertures, or within one of the castellations. 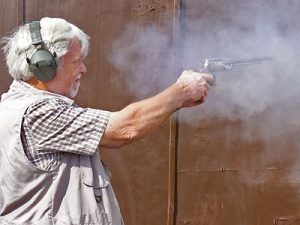 Muzzle Loaded Pistol at Magna is ‘muzzle loaded’ percussion revolvers. Each shot is hand loaded into the front of the cylinder, just like the early days of the wild west! Shooting is generally at distances from 10 to 25m and very smoky.